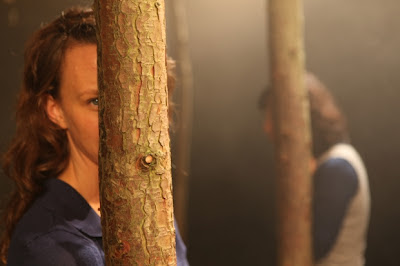 The space is darkened, fathomlessly large, a haze hangs in the air. Nested in traverse seating, a narrow strip of stage shines smooth and metallic, a dozen slim tree trunks rising up from it.

Spooky it is, and beautifully so. One of the joys of living near the Nuffield Theatre is seeing it transformed, by show after show; it's a vast space, and remarkably flexible. I've seen it in every arrangement imaginable, but never like this. Even before the show begins, there's something magical about it.

Three dancers walk out of the darkness and come to stand by one of the short sides of the stage.
There's more animation in their faces than you usually see in dancers, and they don't avoid our eyes. They don't seek them out, either. Something in the way they stand by the stage tells you the forest extends beyond it, though this isn't illustrated in any way.

The music is evocative, ornamented with birdsong, adding to the sense of space. Swiftly but unhurriedly, the man and two women step onto the stage, pick up the conkers lying there, step off. Again, they step forward, radiating curiosity, wonderment. For these opening seconds it's easy to read the piece as a story: Three friends walk into a beautiful woodland; perhaps they're children-certainly there's something childlike in their curiosity, their delight.

I couldn't tell you at what point the stroll became dance, so smoothly did they segue into it, a dance that was playful, concrete, informed entirely by the dancers' response to the environment and each other. They chased each other, hid, their slim bodies concealed more by stillness than any cover the even slimmer tree-trunks could afford. There are moments of abstraction; red elastic they stretch among the tree-trunks, step on, get tangled up in - or the golden spheres they discover and set to rolling in perfect, improbable parabolas across the golden floor. My analytical mind, not entirely detachable from the experience, makes connections to fairytale forests, treasures, and quests.

I glance at the boy sitting next to me. He is completely absorbed, an eager, delighted expression on his face. The dancers seem to be having as good a time as we are, sparking off each other and the shapes and textures of the space. Tangled in red elastic, they huff in mild irritation; hiding and seeking among the trees, they call each other's names. In one of my favourite moments, the male dancer is hiding in plain sight by passing himself off as a tree. One of the women is seeking him "Robin", she calls, climbing partway up a tree-trunk, and then another, "Robin". "Robin," she climbs up Robin's body, gazing over his head and into the forest, "Robin!".

Occasionally, something drops down from above, a leaf, a constellation of suspended lights, and play turns to discovery of this new element in the environment, and again to play. The lights dim, and we know it's night. Robin curls up to sleep. He snuffles and shifts on the floor and then he's an animal; grumbling and lumbering this way and that. Petra and Marianna restrain him, gently, soothe him back to sleep. There are faint flashes of danger in these moments, something primal is glancingly evoked, but before even a hint of real anxiety can develop, the wild creature resolves again into comfortable friend.

Not long after, it's over, ending in a coup de théâtre that made me laugh with delight.

My son tells me he loved it, that it was wonderful. I agree. I remind him that he hadn't wanted to see it because he couldn't tell what it was going to be about. "So," I ask, "what was it about?"

"It was about these kids that went into the forest and started playing about and dancing around there."

It was. And even though I never set foot on stage, I was a kid in that forest too, playing and dancing about.

Posted by Aliki Chapple at 22:33 2 comments: Links to this post

Taking the boy to The Forest 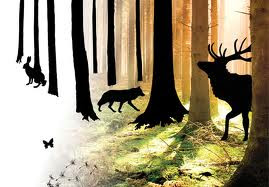 Me: We're going to see a show.

He: What's it about?

Me: Well, I'm not sure. I guess it's about forests. It's for kids. Take a look at this video:

Me: I thought it looked pretty cool.

He: I don't like it that they don't tell you what's going on. And it looks like there's no talking in it.

Me: I don't think there is any talking.

He: It's just dancing. I don't like stories with no story in them.

He: When there's no talking, and you can't tell what's happened, you spend all your time trying to figure it out. It's confusing.

Me: I'm sorry you don't like the idea, but I really want to see this, and you've come to other shows with me that you didn't think you were going to like, and you loved them.

He: I know you're going to make me go with you. I bet I'm going to be really bored.

I understand what he means. As recently as 5 years ago, I too, would have balked at seeing a show with no story, no speech, where meaning was conveyed through movement and sound. My mind still struggles to form meaning, to link up elements of any performance I see into a narrative. I'm still more at ease with story, would probably choose a narrative work over an abstract or impressionistic one, all other things being equal. And yet...I've now experienced performances that moved me deeply, or made me laugh out loud, that were not stories. I've learned, a little, to force my verbal to brain to shut up long enough to experience a kind of beauty that words can only hinder. Everything I've heard about The Forest suggests to me it may hold that kind of experience. So, off we go, this afternoon, one protesting 7-year old and I. Into The Forest. We'll leave a trail of breadcrumbs for you, if you want to follow.
Posted by Aliki Chapple at 11:21 No comments: Links to this post