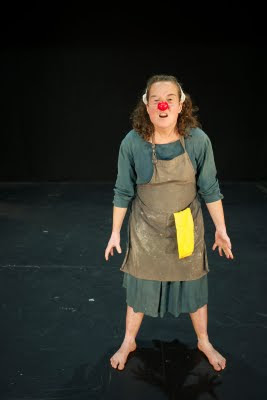 The worst mistake is to play the character….

That’s what Philippe Gaulier said when I asked him about the different ways that performers block themselves from clowning. Well, what he actually said was “the best”, but we all think he meant “the worst.” The stuff of performance is very hard to transmit in words anyway, let alone when the speaker and hearer don’t share a native language. When I write about what I think he said, there’s a lot of guesswork.

Not all actors can be clowns, I guess he said. Some are happy to play a ridiculous character, but they can’t bear to be ridiculous. To clown you have to find a part of yourself underneath the social persona- or maybe the conscious mind- that other people find funny. You have to enjoy having this hidden part of your self laughed at. Then you can build on it, refine it, magnify it. But you can’t fake it; the worst mistake is to play the character.

I saw people do what he told them, in the little, excruciating and valuable time we each had alone under his forensic gaze and everyone’s judgment, and snap into focus on the stage. I did it myself. Goaded to anger and told to be angry, I let loose a stream of Greek invective. He had others speak in their native language too-is an older physical identity tied to native language? I knew I was funny then, when everybody laughed as I cursed Gaulier and them with real anger. “You are not boring,” he said “but this charming character you play is very boring. Anger is good for your clown.” But you can’t spend all your time on stage in a towering rage, right? Wrath is so monolithic, so ponderous, and clowns are anything but ponderous; they’re all about the pleasure of the game. How can you use anger to find the game?

We devised a show when I was an undergraduate in which I played an almost-suave and vaguely sinister androgynous compère in a bowler hat. Whenever the hat fell off or was removed, I’d fly into a rage or howl in despair. It worked, it was funny. It worked in another way too. It gave me something to do with all the anger I’d accumulated over a then six-year relationship with an angry, controlling man. When that relationship ended, and I started studying clown, I was determined not to go there. Anger was too easy to get a laugh out of; too uncomfortable psychologically after so many years of being defined by it, one way or another.

And I tried, I really tried, to find something else, in workshop after workshop. But I learned something watching others, and it must be true of me, too. The red nose is a magnifying glass; it can only show what’s there. Censoring anger, all I found I could show was sadness, and shame. Clowns are shameless, of course. They live too much in the present for regrets, and the closest they get to acknowledging error is a rueful sort of “better luck next time” attitude to their mistakes. And despite the ‘crying clown’ cliché, they’re never mournful. A clown can howl with a toddler’s unrestrained sobs, but is easily distracted from them and never, ever goes around feeling sorry for herself. In workshop after workshop, I failed to get a laugh.

Group games and pair-work on complicity aside, clown exercises are just various ways of framing the injunction: Get out there and be funny for us-and don’t pretend. Many clown teachers use unkindness as a technique. I know there’s a whole philosophy about it, but I haven’t read up on it, I can only tell you my experience. In that experience, that cruelty mostly consists of telling you you’re not funny, brutally and often. The teacher’s words are only an expression of the audience’s restless silence, a magnifying glass, just like the nose. Brutal words were not new to me, I endured them, braced myself to endure them in every exercise, and with every exercise, I got less funny. There’s nothing funny about stoically enduring abuse. Maybe what that means is that my stoicism, and other attempts to be anything but angry is “ playing the character”. It’s not funny because it’s not the truth; the truth is I’m angry.

All of the people who teach clowning in this way tell you that it’s a technique, that they don’t enjoy being cruel to students. Many of these teachers will also tell you that the cruelest of all is Philippe Gaulier. I don’t buy it. Philippe is relentless in his critique, inspiring the audience to join him in extreme condemnations of your failure to be funny. He clearly enjoys the game of being extravagantly unkind, enjoys getting to kick all the sacred cows of social convention too, but I don’t think he was enjoying our suffering. I’ve met at least one clown teacher who clearly did.

There’s something childlike about a clown’s ignorant and unselfconscious enthusiasm for everything. That’s where I’m trying to get; to the joy of the game. I don’t know how I can get there through anger. I can’t pretend to be angry, that’s playing the character again, a boring angry character instead of my boring charming one. But how can you wear your real anger as a pair of clown shoes, how do you teach it new tricks? I don’t get it intellectually, and I don’t get it in my actor’s body. It just doesn’t make sense; but it seems there’s no denying it:

I am ridiculous when I am angry.

I’ve been very angry about a lot of things in the last few years. I’ve felt angry as a woman, as a citizen, as a human being, as a participant in online discussions, as an actor. Studying theatre at university, in my thirties, I became enraged by the assumption that only deliberate formal experimentation was artistically valid. A lot of people who work in or teach experimental theatre seem to look down on plays and acting, treating both narrative and pretense with contempt. I’m told this works both ways (both forms of prejudice are silly) but as someone who tried to learn to be an actor through courses beguiled by different modes of performance, it’s my own experience that makes me angry. I love narrative, I love pretending (and watching others pretend) and I got very short schrift for saying so. I find this infuriating both aesthetically and personally. Most of the time, I manage to keep a lid on that fury.

Recently, I was invited to be part of a discussion group about theatre convened by someone I have great respect for, full of people I like and admire, people I am humbled to be counted among. I was never asked to hang out with the cool kids when I was a teenager, but if I had been, I think it would have felt a little like this.

This week, in one of my first posts to that group, I unloaded all my suppressed fury on one member, whose only crime had been to dislike some texts I was working with and tell me so. You know how when some people post online they attach all the bitterness they’ve ever had around the subject, and lob it at anyone who disagrees with them? My ex did something similar in his frequent abusive episodes, he bundled up years of anger generated elsewhere, and threw it at me. Well, that’s what I did in this discussion group. It wasn’t as bad as what the ex used to do, or as the kind of stuff you get when you admit to being a feminist online, but it was in the same territory. I got invited to the cool kids' clubhouse, where I got drunk, punched one of them, and threw up on the floor. So much for keeping a lid on it.

I’m writing this to apologize, but also to understand. I can’t pretend to not be angry. When I do, when I play that character, what Gaulier called my “charming character” I am boring, it seems. I try to keep a lid on it, then it explodes like a faulty pressure cooker, making a mess and hurting people. How do you take all that steam and turn it into an engine instead, to take you and others to different places? How do you turn your anger into clown shoes and take it for a walk?

I don’t know, but after a week’s worth of Gaulier’s clown workshops I know there's only one place I can start:

I am ridiculous when I am angry. 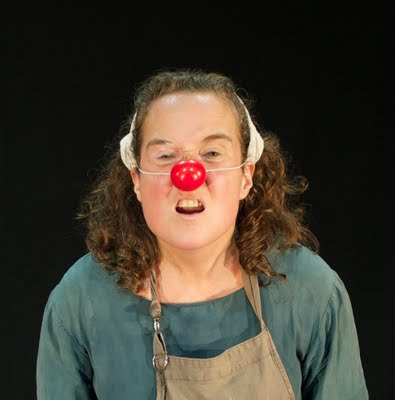 Posted by Aliki Chapple at 13:46 2 comments: Links to this post