Sales Pitch will be at the Nuffield Theatre, Lancaster on September 16th 2010 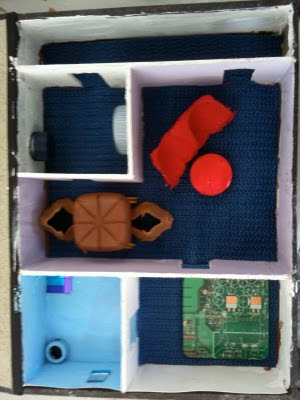 The living unit of Ed and Sally Morris, 23rd Century.


Over and over, when talking about this project, I’ve made, or heard, comparisons to TV shows. Sometimes I talk about Raumpatrouille Orion, the German 60’s TV show in which spaceship instruments are ornamented with intricate protuberances, occasionally made of thinly disguised kitchen implements. At other times, when I was explaining how I intended to make the set, people would start reminiscing about the crafts in children’s shows . I use these comparisons as a sort of shorthand, to convey some of what it’s starting to look like, but using them rankles, somehow. Yes, I'm using video in the show, but live not recorded, and I'm trying to use it in as theatrical a way as I can. After all, the whole idea for me was to see whether I could reconcile my interest in technology and the future with my love of theatre; live, immediate theatre, not the recorded media of film and TV.

Science Fiction in theatre is rare, and difficult; to Americans the very phrase evokes a TV show. Everyone knows that Science Fiction works on TV. TV and movies, with their photographic clarity, seem hyper-real. Even though we know that they are as carefully artificial as anything in theatre, even when they are stylized, even when they use the most spectacular of effects, the camera gives them a certain plausibility. Theatre cannot, with the same plausibility, show events or materials so far outside our direct experience. Theatre cannot plausibly show you a non-humanoid alien, or a supernova. Theatre can implausibly show you anything, all you have to do is agree to pretend.

Because I’d railed so often at how different movie adaptations of Philip K. Dick were from his marvelous stories, I decided to start with him. It was partly a way of poking fun at my own ambitions: in one corner Aliki Chapple, in the other, a group of Hollywood blockbusters! It was also because his stories are so well-made that they could easily be adapted, so prescient that they still had things to say.

From the beginning I knew that I would be working within the constraints of my small skills as a prop-maker and even smaller budget. I also knew that I wanted it as much as possible, to be live. I started work in adapting Sales Pitch in February. Most of the decisions I’ve made since have been about how to work within these constraints; how to create the story on the stage, not plausibly, but imaginably. I could never disguise that my spaceship and planets were hastily made with the cheapest of materials, and if I tried to, I’d lose the goodwill, the willingness of the audience to pretend, that was my greatest asset. So I decided to be obvious about it. I’m making spaceships out of plastic water bottles, planets out of papier mache, 23rd Century living units out of box files.

I want the audience to make no mistake, to see that the staging of Sales Pitch is saying “Let’s pretend.” not “This is so”. And it’s that quality, despite the different nature of the media, that it shares with early Science Fiction television shows; and why I should, after all, embrace comparison with them. The people who made those shows didn’t allow their imaginations to be restricted by the limitations of their skills and means. Neither do children who make robots out of tinfoil-covered boxes. They dare to imagine more than they can represent, and invite you to join them; so do I.
Posted by Aliki Chapple at 07:50 1 comment: Links to this post