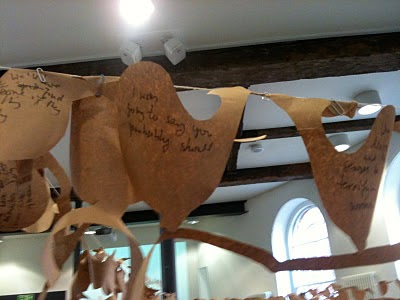 Paper birds with tweets written on them.

We had very little chance to rehearse together before our performance last weekend at the Bluecoat in Liverpool. As a result, the performance was more a scratch than anything else. Other than assigning tasks, and a rough structure, we left it very loose, so that we could adapt to whatever the atmosphere turned out to be. 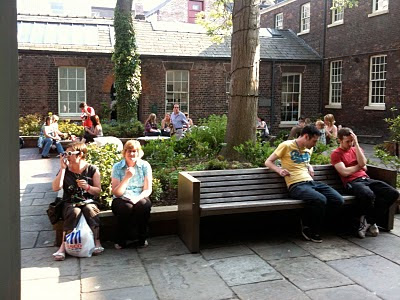 Part of the Bluecoat's courtyard garden, where people sat to enjoy the day.


In the event, it was a beautiful day, and as a result, much of our durational performance in the foyer took place in front of no-one much, the bulk of the 'poolside Emergency festival's attendees, when not watching something in one of the spaces, preferring to sit outside. Who could blame them?

Perhaps this was the reason, too, that we received so few tweets. Or maybe Twitter isn't as popular among the patrons of live art as I had assumed. We had been hoping to put together remarks we had eavesdropped the old-fashioned way from those in the Bluecoat's public spaces with the tweets that people sent about the 'poolside Emergency festival using the #poolem. There were almost none of those, though, and the few we got were, I suspect, sent by Bluecoat staff and volunteers for the sheer amusement of hearing their words repeated. In this way, A Little Bird Told Me . . . turned out rather more like the Request Robot than I'd ever imagined. Not for long, though. For most of the last two hours we performed, the only tweets using that hashtag were our own, transcribed by us from conversations we had eavesdropped on.

We learned a lot doing it, and I'll try to write more coherently on the subject soon. There's a also a video, in partial documentation of the event, and as soon as I've transcribed and edit it , I'll see what I can post. In the meantime, here's what the Bluecoat looked like after we had finished: 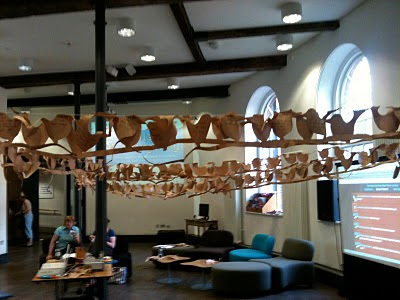 The concrete results of our abstract efforts.
Posted by Aliki Chapple at 14:08 1 comment: